The main concept that was created by the team was to implement an app that promotes user safety in a contemporary setting. To specify, in today’s society, there are still many risks that arise from a variety of sources including encounters with people from dating apps, walks through dark areas, and even a trip away from home. All these things have always been topics of concern for the populous. However, we now have the technology to reduce that risk.


The idea is to create an app to accompany a user as they are experiencing something that makes them feel insecure. The app would be non-intrusive and run in the background. There would of course be a main activity which would handle the setting and preferences of the app before it launches its background work. This settings portion of the app would be where the user has the most control. Here, they can set a home location so that the app knows when a user has safely arrived home, how long a user wants the app to run in the background, what to do if the preemptive measures are unmet and so forth.


The basic task of the app is to provide a means of communication without having to take out your phone and physically dial or type anything. If you are out past what the user set as their curfew for the night, designated contacts specified by the user then become notified through a simple text message generated by the app stating something simple like “Hello, this is ____’s security buddy. I have stayed past my designated time out. Check up on me!” This would then prompt the contact to message or call the user to ensure their safety.


Through a simple SMS based system, the app would be able to generate a variety of messages to send to the designated contacts alerting them of staying out past a predetermined time, not arriving home according to the system’s GPS, or even a prompt from the user that they feel uncomfortable and would like company.


The app itself will run in the background, but there will be a non-intrusive “bubble” much like Facebook Messenger’s bubble which will float on top of the screen on a corner. This bubble will allow the user to quickly interact with the preferences of the app. Upon pressing the bubble, an extended activity will open which would give the user options including sending a distress prompt to designated contacts, changing curfew time, removing location restrictions, or send an “I’m safe” message to all designated contacts if they have already been alerted due to a met requirement. 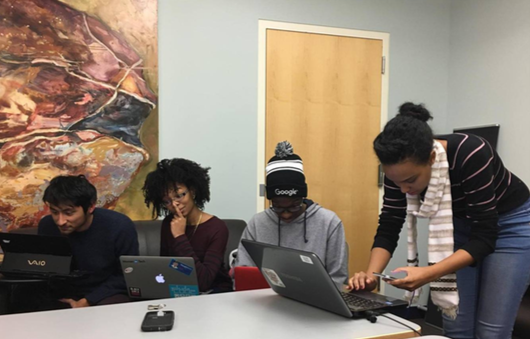